Home »  Security »  What Secrets Are You Giving Away With Your Old IT Equipment?

On December 2, 2018, Posted by James , In Security, By dispose,E-Waste,sanitise , With No Comments

Organisations put considerable resources into buying and installing new equipment, however the often neglected side of the story is what happens old equipment. For some businesses it’s just a matter quickly deleting any sensitive files before throwing it into the skip or simply dragging it out 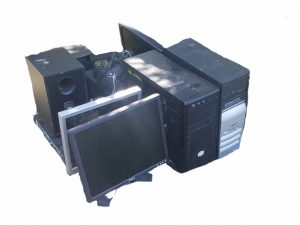 onto the nature strip never to be seen again.
But is this really enough?

Identity and intellectual property theft is a very real risk in today’s modern age with malicious hackers frequently combing through disposed equipment to find valuable information. Even if equipment is formatted, files and configuration may still be recovered posing a serious security risk.

Where does this waste E-Waste end up?

Initially old equipment is sent to central processing stations out in the open such as at local tips. Quite frequently individuals will sift through this gear looking for anything that appears valuable. After this the remaining equipment is often sent to developing countries where it is broken down by hand into working components which can be re-purposed and sorted raw materials.

If the equipment hasn’t been properly sanitised it could end up living a second life with your data fall into the wrong hands!

What equipment is at risk?
If it stores data, ever was connected to the organisations network or holds a configuration you should be mindful of how its disposed.
This may include;

Manufacturing computer components requires a substantial amount resources which has an

environmental impact. We encourage the reuse of equipment where possible and recycling once it has reached the end of its life. Many E-Waste organisations will pick up your old equipment for free and dispose of it responsibility.
We recommend always formatting your equipment first and researching how they will ensure your privacy is maintained.

Does your business need helping managing your network or have any questions?
Give us a call on 1300-733-240 or leave a comment below